Following discussions with the Liberian government, REM was invited to conduct a scoping mission in Liberia to assess the feasibility of an independent monitoring project. REM met representatives of civil society, government, international donors and organised a workshop on IM-FLEG.

Liberia’s forest sector became synonymous with conflict and structural violence in Liberia and its neighbouring countries in the 90s and the early 00s. This led the UN Security Council to impose sanctions on Liberian timber exports in 2003. Since then, reform of the forests sector has been at the centre of discussions on Liberia’s forests to help ensure sustainable development for the state and its people. With significant challenges facing the implementation of the country’s new laws and regulations, and with the recent agreement of
the EU-Liberia VPA agreement, Independent Monitoring of Forest Law  Enforcement and Governance (IM-FLEG) represents a possible path in moves toward an ultimately more transparent and contributory sector.

While there have been many positive developments, there are also several significant challenges in the implementation of reform measures. In particular, controversy has surrounded Social Agreements signed by logging companies and local forest communities, concession allocation processes, the loopholes created by Private-Use Permits (PUPs), the potentially false representations of the social and economic potential of the forests sector. 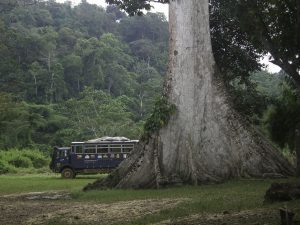 The principal objectives this REM study were to introduce Independent Monitoring of Forest Law Enforcement and Governance (IM-FLEG) to key stakeholders, to explore its possible makeup in Liberia and to liaise with key stakeholders in the development of a common vision and roadmap for IM-FLEG in Liberia.
Independent Monitoring (IM) can be interpreted in several ways. The term has been used in the Liberian context to refer to Chain of Custody (CoCs) systems, to planned monitoring mechanisms as prescribed for under Voluntary Partnership Agreements (VPAs), and to informal ad-hoc monitoring by civil society organizations as described above. For purposes of clarity, and unless otherwise stated, all references to Independent Monitoring in
this report will be in specific reference to Independent Monitoring of Forest Law Enforcement and Governance (IM-FLEG), which encompasses the monitoring, by an organization or consultancy, both of forest activities by the private sector and of law enforcement activities by government services. Within this definition monitoring activities are carried out in collaboration with government departments concerned and a formal agreement relating to
access to information and the publication of resulting reports is established to ensure support ownership of the findings and results of project activities.
The Objective is to detect and report on illegalities, NOT to certify legality of selected wood. Typically, IM-FLEG represents a model of intervention in states that are stable but with poorly performing ministries or governments. The purpose of IM-FLEG is to assist the host-government in realizing its stated policy objectives for the forest sector. As such, an IM-FLEG operates with structural links to the government and requires close co-operation between the host-government, international donors and the Monitor. An IM-FLEG body
should possess credibility and legitimacy among a broad range of stakeholders, in particular civil society. In working closely with host-government agencies in the administration of forest related activities, an Independent Monitor documents the functioning of the host-government’s own monitoring and control systems and transparently reports findings to interested parties.
Reports highlight, for example, weak areas of existing monitoring systems and include recommendations on how to improve these. The Monitor also documents the forest activities of the private sector both independently and together with government forest officers and the police, to increase the availability of information and bring support to the government's own
efforts to suppress illegal activity in the forest sector.
Read the full report here.