Forest exploitation and governance in Tanzania

In October 2009, REM, working together with HTSPE Tanzania, completed a study look at the installation of a new Independent Monitoring project to tackle the Forest Law Enforcement and Governance problems in the country. The final report is now available for download.

Forest exploitation and governance in Tanzania

Tanzania's forests contain 2,019 million metric tons of carbon in living forest biomass. Biodiversity and Protected Areas: Tanzania has some 1898 known species of amphibians, birds, mammals and reptiles according to figures from the World Conservation Monitoring Centre. Of these, 9.0% are endemic, meaning they exist in no other country, and 6.1% are threatened. Tanzania is home to at least 10008 species of vascular plants, of which 11.2% are endemic. 14.6% of Tanzania is protected under IUCN categories I-V.

Following revelations about widespread illegal logging in Tanzania, in 2005 it was first suggested that the implementation of an Independent Monitor of Forest Law Enforcement and Governance (IMFLEG) might improve the situation.

The objective being to reduce deforestation, increase government revenues and help protect rural livelihoods. Studies since have reiterated both the scale of forest crime in Tanzania and the potential benefit an IMFLEG may bring. 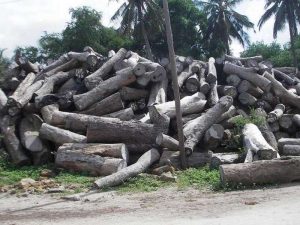 Desk and field research conducted for this study has found that while illegal commercial logging has fallen considerably from its peak in 2003-2005, illegal activity remains widespread with respect to all aspects of forestry in Tanzania, including harvesting, imports/exports, regional and domestic trade and processing.

A summary table of Recommendations on substantive issues can be found on page 54 of the scoping mission report.

The appendices to the report also include a proposed Terms of Reference for a future project and a test field mission report, which has been presented to the ministry and discussed at length.